Home Lifestyle ‘Parasite’ director says his success is due to a ‘very simple lifestyle,’... 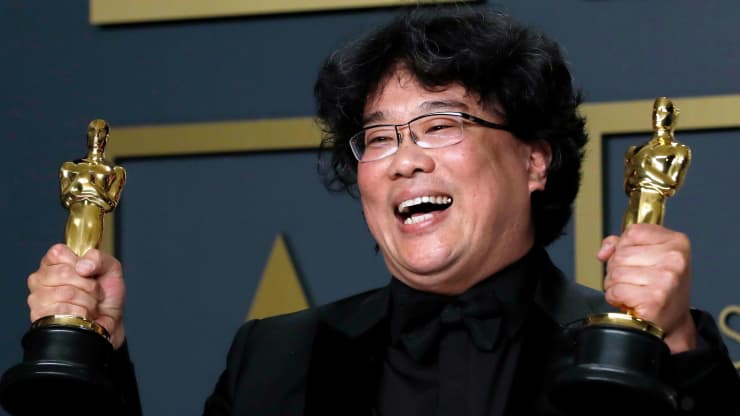 Award-winning filmmaker Bong Joon-ho’s formula for success is pretty simple. According to an interview with The Telegraph, his creative secret is leading a “very simple lifestyle,” which involves drinking coffee, writing and not meeting a lot of people.

The strategy seems to have paid off. The writer and director took home four Oscars for the film “Parasite” at the 92nd Academy Awards on Sunday in the categories of best picture, director, international feature film and original screenplay.

Bong, who studied sociology and starting making films in college, closed out awards season on a high note after completing a nearly year-long media tour surrounding his dark comedy about two South Korean families on opposites ends of the wealth spectrum.

Long before the director’s major wins, Bong learned the importance of staying focused on his work and true to his creative vision, even under pressure from other powerful figures in his field.

While working on his first major U.S. release “Snowpiercer,” Bong reportedly came to a disagreement with producer Harvey Weinstein about the action-thriller’s editing. When the Weinstein Company bought the movie’s distribution rights in 2012, the producer demanded roughly 25 minutes be cut out of the film.

“It was a doomed encounter,” Bong told Vulture in an October 2019 interview. “I’m someone who until that point had only ever released the ‘director’s cut’ of my films. I’ve never done an edit I didn’t want to do.”

After months of back and forth, the director was able to claim one small victory. He told Weinstein that he didn’t want to remove a scene where a train guard guts a fish in front of rebels, as a show of intimidation. While Weinstein reportedly insisted it be cut, Bong attempted a Hail Mary and told him, “Harvey, this shot means something to me … It’s something personal. My father was a fisherman. I’m dedicating this shot to my father.”

The producer ultimately backed off, saying that he understood retaining the detail because family is important.

After news of the conflict became public, Weinstein moved the project to the company’s independent arm and gave the film a limited release. While “Snowpiercer” didn’t get wider publicity despite a blockbuster cast and story, Bong said it was worth being able to present his director’s cut to audiences.

Bong took these lessons to his next venture in 2017, when he worked with Netflix and a budget of $57 million to direct “Okja,” an action-adventure film about a Korean girl who raises a genetically modified super-pig.

The director’s decision to work with Netflix wasn’t well received by everyone, however. When the Netflix title card appeared ahead of “Okja’s” screening at the Cannes Film Festival that year, several audience members booed, stoking the discussion as to whether the streaming giant deserved to be considered a part of the film industry. (It’s unclear whether the reactions were due to technical difficulties with the screening, or as a response to the Netflix logo.)

For his part, Bong says he made the deal with Netflix specifically because the studio gave him complete creative control. Despite the Netflix debate, Bong’s work was critically acclaimed. “Okja’s” second Cannes screening received a four-minute standing ovation, and it was named by The New York Times as one of the most influential movies of the decade.

Now with his latest work on “Parasite,” Bong has demonstrated that trusting his creative instincts pays off. The film became the director’s first to gross over $100 million worldwide, and it’s earned him awards from the Academy, British Academy Film Awards, Golden Globe Awards, Cannes Film Festival and more.

During his Oscars acceptance speech for best director, Bong thanked his fellow nominees for their work and inspiration. He specifically recognized and quoted Martin Scorsese: “When I was young and studying cinema, there was a saying that I carved deep into my heart, which is that, ‘The most personal is the most creative.’”

According to Insider, Bong revealed at a London screening of “Parasite” that the film was indeed inspired by true events — at least to an extent. The film follows the Kim family, who live in a cramped basement apartment, as they plot to become employed by the wealthy Park family and infiltrate the lavish household one person at a time.

When he was younger, “my girlfriend was teaching English to a boy in a wealthy family and he needed a math tutor, so she introduced me to the family,” Bong told the Q&A audience. This is the same way the son of the Kims becomes a tutor for the daughter of the Parks, which kicks off events in the suspenseful home invasion plot.

“I worked with her in that house, but the story ends there, we didn’t do anything bad,” Bong added. “I was fired after two months. That girlfriend, however, is now my wife.”

“When people in the U.S. were not familiar with my films, Quentin always put my films on his list,” Bong said. “And Todd and Sam, great directors that I admire. If the Academy allows, I would like to get a Texas chainsaw, split the award into five and share it with all of you. Thank you. I will drink until next morning, thank you.”

Seven Bape Shirt Trends You Need to Know About

How to Buy Safari Glamping Tents That Satisfy Your Needs

How to maintain a clean vape device?